MoistureFree Warranty spent months and thousands of dollars to be in compliance with the Illinois Department of Insurance. Chicago and Naperville Dryvit EIFS and Stucco home buyers and sellers beware of companies or individuals purporting to offer a stucco bond or a stucco warranty in the State of Illinois. There are absolutely no stucco bonds, and the only approved... 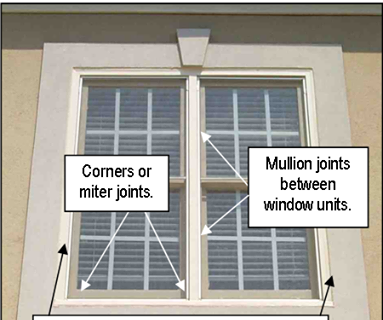 Poor Rough Opening Preparation Approximately 60% to 70% of all high moisture readings in EIFS-clad homes occur at window and door locations. Windows are by far the largest contributor to moisture problems, mainly due to the significant number of window units found in the average EIFS-clad home. Many rough openings have no protection from leaks from around or within...

BY ALLEN NORWOOD  Charlotte NC 02/05/2015 12:00 AM Two decades ago, horror stories about synthetic stucco dominated housing headlines. Mansions were rotting, stories said. Lawsuits were flying, while stucco manufacturers and builders hunkered down. EIFS stands for exterior insulated finish system. Water that got behind the synthetic surface could get trapped there,...

The most insidious part? By the time the outside stucco begins to show the effects of water damage, it’s too late. And because Georgia offers little or no protection for homeowners, an unsuspecting buyer could still end up with a synthetic stucco home. Meanwhile, homeowners’ insurance won’t cover the cost of repairs, and legal remedies dissolve over time.
Then in 1994, North Carolina’s coastal New Hanover County inspection department in Wilmington began fielding complaints about synthetic stucco homes, six in one week. To date, the department has inspected about 600 homes and found 94 percent had moisture problems.

Modern building materials like wood, drywall, wallpaper, and fabric are excellent food sources for mold, while synthetic stucco building technology can leak and trap moisture inside.

Pre-repair mold testing is always a good practice. Sometimes finding the exact source of the mold can be frustrating and difficult. Mold spores are everywhere – inside homes, up in the attic, in a home’s yard outside, living rooms, kitchens, etc. It is a question really of how much and what species of mold that is present. Some molds are worse than others in terms of toxicity. If a building smells moldy, for instance, hidden mold could be the culprit, but perhaps the source cannot be pinpointed. If it is known that there has been water damage and health problems are being reported then is it usually safe to assume that mold growth is present. Modern building materials like wood, drywall, wallpaper, and fabric are excellent food sources for mold, while synthetic stucco building technology can leak and trap moisture inside. Home appliances like washers, dryers and dishwashers also generate water vapors which again create the type of thriving environment conducive to mold infestation.

A construction problem is rotting local homes and forcing homeowners to pay six figures just to keep them standing.
“Nobody could imagine what it’s like to have your home in shambles,” said Lisa O’Day.

Rotting from the inside out.
This has been by far the hardest thing I’ve ever been through in my life,” said O’Day. The O’Days must spend upwards of $200,000 to keep their million-dollar home from falling apart.